The spirit of self-reliance

Is it possible to have a company where all of the employees are self-reliant? What does it mean? What has to change? Who is doing it successfully?

Most companies today are hierarchal with managers and supervisors on top and all of the other employees below. Decisions are normally top down and the average worker has a choice: do what you are told to do or go home. Workers have very little say in how their jobs are designed and often their jobs are very repetitive and boring.

Okay, what does self-reliance mean? It means you, the worker, know your job the best and have the high skill to do it correctly and can make all or most of the necessary decisions related to your work.

Today, you are trusted to do what you correctly did before. But if you want to do something new, you have to ask your boss or supervisor for permission to do it.

For example, I was teaching a lean internal consultant over zoom.us, at a large hospital in Alabama on how to pick goals, how to set the tasks to attain those goals, how to monitor yourself to make sure you are doing what you want to do and also how to coach others so that they also know how to set goals and attain them. Since most people are locked into habits, goal setting is a very powerful process to help you grow and be more creative at your job.

I asked him to pay me something for teaching him. He said, “I have to ask the president of the hospital.” Before going to the president, I recommended he call, for reference, a former student of mine, also a lean internal consultant, at a hospital in Indianapolis. He did and was told the hospital had saved over $1.5 million. With that information, he went to his president to get permission to work with me. The president said, “Sorry there is no money in the budget.”

Absolutely amazing! At times, it is an insane world. My fee was just to give me something.

In a self-reliant world, the consultant would have been empowered to suggest a reasonable rate to pay me knowing that the hospital would benefit enormously.

In Japan, Mirai Industries, a manufacturer of electrical and plumbing parts with around 1,000 employees, in 50 years, has never lost money, with 40,000 patents, the most versus any other company its size in Japan. It has one basic rule: “No HoRenSo:”

No “Ho” – no reporting, no asking for permission; if you want to do something new, just do it

No “Ren” – no communicating with anyone else; you decide what is right

No “So” – no consulting – we want everyone to be self-reliant

If you make a mistake, just correct it, but never make the same mistake again. You won’t be fired, or laid off, but you can be slightly punished.

Imagine working at a company where you are truly self-reliant, truly respected to be treated as an adult and allowed to make new decisions on your own! In truth who knows your job best? Of course, you do!

Toyota claims two pillars for their success: one is “Just-in-Time” (JIT), and the other is “Respect for People.”

But, what does “respect for people” really mean? Can a Toyota worker do something new without asking for permission? How much flexibility does a worker have in the design of their job? At Toyota, a worker on the line has around a two to three minute “takt” time, where they repeat the same job every two or three minutes. Doesn’t sound very exciting to me.

However, at Canon Corporation, they have workers called “supermeisters” in cells, where they can build by themselves an entire copier with over 1,000 parts with higher quality and productivity than previously done on their conveyor belts. In Germany, at BMW and the other car manufacturers, there are craftsmen building entire sub-sections of the automobile with much longer “takt” times. 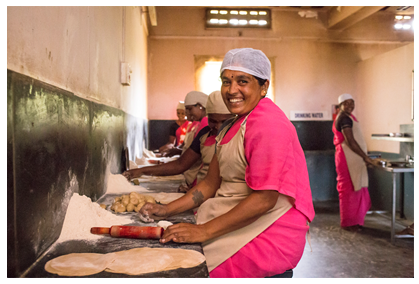 Last year, I spent a few days with people working for Srinivasan Services Trust (SST), a non-profit organization, established by TVS Motor in Bangalore, India. SST, in the last 20 years, has uplifted over 2.5 million people out of poverty by organizing people to form self-reliant teams to find ways to earn a new living. I visited one of their villages and saw 15 women making “chapati” bread in a factory.

These women own the facility jointly. They take a weekly salary and share a bonus at the end of the year. Their houses were no longer straw or wooden shacks; the houses were made of cement with electricity, running water, televisions, etc. They even had their own toilets, a rarity in India. Through working in their own self-reliant groups, they now lived fruitful and purposeful lives.

We, in America, cannot compete with East Asia with their “cheap labor.” We have to develop people’s skills and allow and encourage them to become entirely self-reliant. 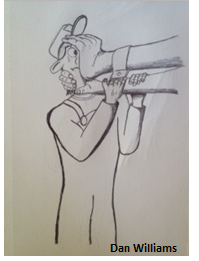 Of course, you are free to do what you