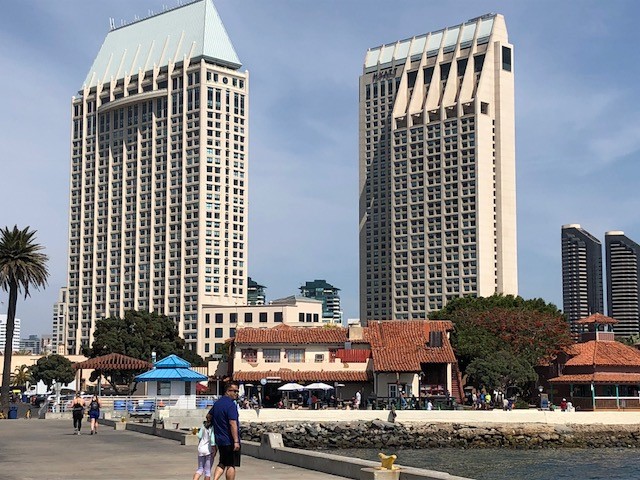 Where can you find perfect weather, a plethora of scenic beaches, an extensive list of craft breweries and restaurants and a thriving community of innovative businesses? If you thought of San Diego, you’re correct! The 8th largest city in the U.S., it is known as the “birthplace of California.”

With so many great things to see and do in this beautiful city, we’ve compiled a list of ten must-see attractions in California:

Among the many gardens within Balboa Park, you’ll find Alcazar Garden, the Botanical Building, the Inez Grant Parker Rose Garden, Japanese Friendship Garden and the George W. Marston House.
Take in a performance at the Spreckels Organ Pavilion, which features one of the largest outdoor pipe organs, the Old Globe Theatre Complex, a replica of Shakespeare’s Globe Theatre or the Starlight Bowl.

10) San Diego Zoo. Located within Balboa Park, the San Diego Zoo is the home to more than 3,700 animals including one of only four U.S. zoos to be home to giant pandas.

8) U.S.S. Midway Museum. Located at San Diego’s Navy Pier, the USS Midway is America’s longest serving aircraft carrier, which served the United States Navy from 1945 until 1992. Built by Newport News Shipbuilding Co., in Newport News, VA, the carrier was commissioned just after World War II and served in both the Vietnam War and Operation Desert Storm. The museum includes a collection of military aircraft and visitors can tour and even climb aboard them.  More than 1 million people visit the museum each year.

7) Gaslamp Quarter. Known as a historic district in San Diego, this neighborhood covers 16.5 blocks and is the site of numerous fairs, festivals, restaurants and local events such as the Mardi Gras and the St. Patrick’s Day ShamROCK. Many of the historic buildings in the Gaslamp Quarter date back to the Victorian Era, including the Marston House and the William Heath Davis House.

6) Maritime Museum of San Diego. Established in 1948 the museum is home to one of the largest collection of sea vessels in the United States including the oldest known sailing ship in the world, the Star of India. Take a tour of each vessel in the museum and you’ll get a sense of history and an appreciation for travel on the high seas.

5)  Sunset Cliffs. Want the perfect vantage point to experience a sunset? Don’t miss the Sunset Cliffs located in the Point Loma community of San Diego. Located on the western side of the peninsula, the Sunset Cliffs are made of sandstone and offer breathtaking views of the Pacific Ocean and picturesque sunsets. Nearby, the Old Point Loma Lighthouse, also known as the “Old Spanish Lighthouse,” serves as a beacon to watercraft.

4) La Jolla Cove and Shores. Located along seven miles of coastline, La Jolla is a seaside community lined with upscale shops, restaurants, art galleries and beautiful views. Featuring both rocky shorelines and sandy beaches, La Jolla is the perfect place to relax and unwind. It also features some of the priciest homes in America.  Located within La Jolla (as mentioned above) is the Torrey Pines State Reserve.

3) Old Town San Diego State Historic Park. Located in the community of Old Town, this is the site of San Diego’s pueblo settlement and the location of some of San Diego’s most historic homes including several adobes. If you’re looking to get a sense of what settlers may have encountered back in the early-to-mid 1800’s, this is the area of San Diego.

2)  Coronado Island. Located across from San Diego’s downtown area and connected to the mainland by either the Silver Strand or the San Diego-Coronado Bridge, Coronado is the site of the U.S. Naval Air Station in the northern section of the island and some of the area’s priciest real estate and shops in the southern section. Soak up the sun at the beach or stay at the historic Hotel de Coronado.